Tear Down Twain? The Literary Monument that is Huck Finn

Norman Rockwell's artistic work The Problem We All Live With (1964, pictured left) was one of that iconic White American artist's depictions of the racism in his day. A determined Ruby Bridges, the real life six year old who'd desegregated New Orleans' William Frantz elementary school, is forced to walk under the hateful cloud of the "n-word". The starchy lock-step of U.S. Marshalls is contrasted by the riotous splatter of a rotten tomato. Rockwell titled the piece to suggest that people in his time lived with these stark, toxic contrasts everyday. It was an earnest attempt at anti-racism.
My mother, Sandra Marie Frederick, was a 16 year old neighbor of Ruby Bridges in the Lower 9th Ward of New Orleans. Six years prior to what is depicted in that image, my mother had fought White boys, who flung rocks and spit at her and her younger sister and brother as they came home from school as the only Black children on the block. By the time Ruby Bridges moved to New Orleans from Mississippi, the Lower 9th Ward was all Black. There's no doubt that the White mothers who carried Black baby dolls in caskets, hung them from nooses, screamed, cursed, and threatened this 6 year old child were afraid that Ruby Bridges was the first of many. They felt they had to protect their little White children by all means--rioting and fighting police if necessary.
This wasn't the problem "we all" lived with. This was the problem White people lived with. Anti-Black racism, at its most hateful and violent, lived in the neighbors and church members of your grandparents and great grandparents. Maybe that violent anti-Black racism lived in your grandparents and great grandparents. This is the problem White people's ancestors lived with, and the problem my ancestors fought against.
Anti-racism is the call of the day. People are realizing that being non-racist is not enough. The problem with being non-racist is that it supposes a neutral starting point. As long as we believe that kids are born without bias, if we remove things that might inspire bias in them, racism will go away. As a child of integrated schools in the 1980s I can tell you two reasons integration didn't eliminate racism.
We are not starting from neutral. We are starting with The Problem We All Live With, which is stacked on top of 10 generations of virulent racism and anti-Blackness. When we assign texts, we need to assign anti-racist texts that work to undo bias and racism, not just pretend they aren't there. But what should we do about flawed attempts at anti-racism like Adventures of Huckleberry Finn and To Kill A Mockingbird?
If we make the analogy that these celebrated books are like literary monuments, all over the country monuments are being torn down. Should we take down Rockwell's painting because the "n-word" is in it? Barak Obama would say no. At Ruby Bridges suggestion, the president had The Problem We All Live With, installed outside of the Oval office from July to October 2011. Why would he do that? I imagine he did it for the same reason I taught Huck Finn; we need to always remember that no American generation starts from neutral.
Like The Problem We All Live With, To Kill A Mockingbird and Huck Finn are a flawed attempts at anti-racism. As much as they intend to call out White racism, they perpetuate stereotypes. They also venerate Black suffering and White heroism as if the two are inescapably linked. No wonder many of us are numb to Black death and defensive about White poeple's good intentions. For generations, the books we read in school taught us that.
But in The Problem We All Live With, we don't see the White boys who giggled while they spray-painted the "n-word" or threw rotten tomatoes. We see the White man Marshalls marching like soldiers of freedom. We don't see the psychotic, spitting rage of White mothers. We see Ruby Bridges' super-human determination in the face of White riots against her humanity. We don't see the heart-breaking fear in Ruby Bridges mothers's eyes. We see the hard march of human progress. Rockwell's painting, as much as it is an attempt to expose racism, represents the White gaze, a haze of toxic positivity that pretends progress even in the face of the opposite.
Yet there has been progress, and we can't track it or forward it unless we face the ugliness of the past. Huck Finn is flawed in much the same way that Rockwell's painting is flawed. But just as that painting should be hung up to spark conversation about what it gets right and what it gets wrong, what stories it tells and which stories it doesn't... we should teach Huck Finn for anti-racism.
Teaching Huck Finn for anti-racism was one of my greatest and worthwhile teaching challenges. Here are some ideas I learned from Toni Morrison about how to do that.
P.S.
Morrison, Toni. (@ToniMorrison) "If there is a book you want to read, but it hasn't been written yet, then you must write it." October 30th, 2013, 8:26. Tweet. Having suggested this, I believe that the best way to engage Adventures of Huckleberry Finn is to excerpt it and teach it with a text that is in conversation with it. Jim Huckleberry, was born for that purpose. 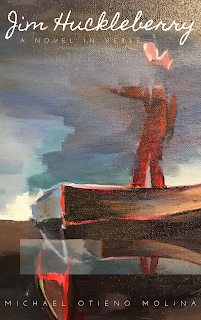 Jim Huckleberry is a new anti-racist retelling of Twain's story from the perspective of Jim as a self-liberated, formerly enslaved Black man. Jim Huckleberry directly confronts the racism in Twain's most famous work, while excavating and building upon the anti-racism imbedded in that conflicted novel.In Jim Huckleberry, Jim longs for his wife, pines for his children, considers violence as a means to freedom, investigates religion and the nature of existence with the depth of a philosopher. Jim is centered as a full human through an inner-voice full of rhyming, rhythmic lyricism that directly challenges the nearly unintelligible faux "negro dialect" that stains Twain's work. Jim Huckleberry was inspired by a great teaching challenge - teaching Huck Finn in 2016 Baltimore during a racial charged school year at a now integrated independent school with a racist history.Jim Huckleberry gets Twain's assertion that racism is White people's problem to fix, and centers Blackness to give teachers an anti-racist text to help with that difficult work. The anti-racist power of this book and its origin story in the challenge of teaching Twain will inspire your administrators, teachers, and students to want to be anti-racist. Try Jim Huckleberry as a summer read. You can get it on amazon here. If you need proof of quality, listen to a reading of the opening page on soundcloud here.Consider engaging this work of an anti-racist teacher and writer. Find out more at www.mikemolina.org.
Posted by Mike Molina 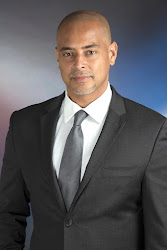 Michael Otieno Molina is an author, educator, principal of 5D Stories - books, films, music, live performance, and curriculum to that increase human understanding to catalyze human potential. Michael serves as the Head of School of the Bishop John T. Walker School for Boys in Washington D.C.